Xenophobia is not the problem, violence is

There is a theory many anthropologists expound called the North-South Axis, it explains the burning alive of foreigners in South Africa and the drowning of migrants in the Mediterranean seas. Firstly we must acknowledge they are people not migrants, “human beings” evokes too much empathy, so we label them as – other. The north-south axis, tropical and temperate lands have always had conflicts where they meet. The more north or south you go, the climate changes, whereas east-west generally has the same weather. So long ago, the first Africans left Africa and migrated into Europe and Asia, they had no need of black skin for keeping out UV and Gamma rays, they shed their dark skin. Up to 10,000 years ago all people were the same race – Brown. When these Africans reached Europe they encountered a cold climate which you had to alter to survive, you had a short window for farming, only one 4 month window so farming had to be maximised. They domesticated animals brought mostly from Asia, the cow, sheep, horse, and other beasts of burden. These animals gave them many things; immunity from disease, milk and meat, warmth in winter, companionship, and above all – labour. Oxen could plough what 50 strong men could dig, this allowed them to cultivate larger areas with fewer people, these people could now specialise in other fields of knowledge. In Africa, 80% of people are still tied to their land in subsistence agriculture, unable to have time to specialise in other skills.

This is not the first round of Globalism We have had many before, especially after Columbus opened up the world, I remember studying about Bartholomew Dias and Magellan, Jan Riebeck, accidently heroes or villains by timing. I loved them none the less, the slavers, they had a sense of adventure and fearlessness. The Cape started as an orchard, Dutch and British sailors on the way to the East Indies were dying of Scurvy caused by lack of fresh fruit and vegitables. So they planted some apples, and the rest is history. The Dutch found this land to mirror the Climate of the Europe they left behind, but as they travelled North, they encountered strange climate and strange people. It took from 1600 to 1836 for whites to reach where Johannesburg is, as they went more north they found their crops were failing, wheat, and other cereals needed winter rains not summer rains. Likewise, the Bantu in their migration south stopped at the Fish River, here they found their crops from tropical zones could not grow, they crossed the Tropic of Capricorn . So in a way, South Africa has been this Other place, separate from Africa in climate and geography, a magnet for people drawing them in from all over. The first globalism phase saw; Dutch, Belgians, French Huguenots, Portuguese, Spaniards, British, as well as; Indians, Malays, Arabs, Chinese, Malagasy, to be de facto slaves as indentured servants and finally Africans from other countries to work the mines. The rainbow nation has 11 official languages and 20 other recognised languages, several other dialects, but there is no room for more. 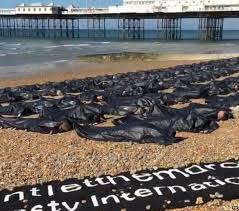 Imagine a starving refugee being told of a far away kingdom with gold in the streets, the only problem is that the kingdom is a Fortress. Tall razor wire walls and fences guard it, it is guarded by a moat the size of a sea, to cross the sea infested with sharks. The EU is a product of Xenophobia, the fear of a race being left behind, so it had to band together, they also fear the brown people so they put the walls of the fortress up. Globalism is about free movement of humans, goods and capital, the goods and the capital are allowed to move freely, but humans are more restricted than even in their movement. The abundance of technology has compensated for this lack of free movement. For those who apply through normal channels, it is impossible to get into the fortress, so one must take their chances. Some 1,500 migrants have drown, out of some 200,000 who crossed, that is 0.75% chance of drowning. We have see the worst face of humanity shown with the callous disregard that the EU leaders had towards the drowning migrants, some leaders see deaths as a deterrent. It makes you wonder what life is so bad that you can drown just trying to get there, not that Europe is that good. This is globalism, the human tide coming to swallow you up, the Mongols at the gate, the Barbarian hoards coming to plunder. These are chickens coming home to roost, the bombing of Syria, allowing Assad to use chemical weapons has led to – guess what? Lots of refugees, lots. The bombing of Libya to remove a stable Ghadaffi Regime has created a haven of chaos and terrorism that people smugglers are using to sneak people into Europe. Europe needs this migrant labour to do the jobs that locals won’t do but they must pretend to fight it, give them deadly backdoor gauntlets to run, to prove their worth.

Apartheid was built on a lie

The white man told them “You have it good compared to other blacks, Okay you are oppressed, treated like crap but other Africans are swinging in trees.” The most ignorant things I’ve heard about Africa have come from Black South Africans. “Do you have roads and cars in your country?” and “Is it true that you don’t have TV’s? Do you eat monkeys in your country?” They still believe in South African exceptionalism, that it is separate and unequal to Africa. Black South Africans internalised the deep racism during Apartheid and are now deflecting and projecting it onto other Africans. The same nasty things the white man said about Africans, they say about their kin. The same brothers who helped them fight apartheid are labelled Kakwerekwere. South Africa has abdicated the responsibility of leading Africa, it has withdrawn into itself; so Africa came to South Africa, or the mountain came to Moses. These African migrants made trade connections back home and now SADC trade is very important for SA.

No sense of a clue

This xenophobia stems from a deep-lying ignorance of history, after the glory came the shame. After the euphoria of liberation, came the shame of ever being oppressed, the story was swept away. Some South African students were recently interviewed about Africa and their knowledge of their own history and African history was astoundingly bad, yet they were supremely articulate and confident enough to embarrass themselves in their lack of knowledge. For this, I can only blame the education system for teaching kids about everything, except what really matters; who they are and how they fit in the global community. They knew nothing of Mandela, couldn’t name 5 African countries, they thought Africa had 21 countries, thought Kenneth Kaunda was a woman, I really worried for SA’s future if they have such witless kids with access to google.

The problem is not Xenophobia

The problem is violence, South Africa is a deeply violent nation, some 15,000 murders every year, UK has 63m and 800 murders, so compare. There is a rape every minute, robbery and assault are too common to report as crime, there is violence all around. Sadly, every so often, this violence turns on foreigners, but it is mostly targeted at the weak. Old women are raped and we say nothing, children are raped to death and they say nothing, a government warning only leads to a spree of more child rapes. The problem is violence, violence is a weapon in politics, slums are run by politically affiliated gangs to deliver votes in Townships. The ANC machine you see chanting and stomping in threatening mode is always in the forefront, but what does this township machine do in its spare time between elections? They run petty crime, violent crime, and every so often they turn on foreigners. That is perhaps why Jacob Zuma was slow to condemn them, to condemn his own machine. We know such gangs cannot operate without local officials turning a blind eye. So instead they condemn the victims, asking “what were they doing here?” they downgrade xenophobic killings to “normal robberies” because a phone was taken during the crime. It is a nation desensitised to violence, unable to see the big deal if everyone is a target some day or another. The government is scared that if it takes pressure of foreigners then the pressure will shift onto them, they are the real ones to blame for South Africa’s ills.